Menu
Log in
Register
Install the app
You are using an out of date browser. It may not display this or other websites correctly.
You should upgrade or use an alternative browser.

Developer
QA Admin
Greetings!
This is the changelog of the update release on Map #4 release.
This update contains Tradia, G-Kits, a claimbox and more...
(Release at 23rd July, 8pm CEST)

Tradia
Tradia is a new dimension of the magic server.
It replaces the old mining world dimension, making interacting with the mining world a lot more interesting.

How to enter Tradia?
You are able to find the ANCIENT MINER at the market, he will have quest for you!
Once you completed the quest you are able to travel to Tradia. But what even is there?
As previously said all mining world stuff has been moved to this island but that's not all, Tradia is required to play mining world.
There also is a mine at Tradia where you can mine ores just like in the warzone just with the change that you have a chance of receiving mining world tokens! The Painter and Carpenter
Probably two of the most requested marketeers have now been added.
They sell items usually annoying to craft, making your life a lot easier!

Images of the Painter Images of the Carpenter The Librarian
This guy is available for you once you are LEVEL 15.
You are required to complete his quest to enchant and access him, he can be found in the big mansion at Tradia! Once you completed it he has quite a broad offer of items, take a look. Does it bring any other new features?
Yes, the Dwarven Sky Drop.
This skydrop has multiple features, it respawns all ores in the warzone and always spawns a special item.
Additionally it contains special loot.

But... how do they work?
After placing it in the WARZONE you will see a hologram with your G-Kit name, this indicated that its BEACON is landing soon.
Once the beacon landed you can break it, you are not guaranteed to unlock the kit after successfully breaking it.
If you don't unlock the G-Kit you will receive one item out of the kit. This ONE ITEM rule also applies to redeeming the kit!

They can be found in the WARZONE or in OPENABLES as special loot.
Please keep in mind, using a pickaxe wont affect the breaking speed, everyone has the same chances when breaking the beacon! 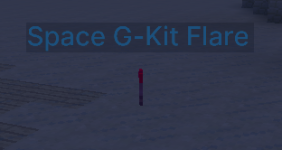 What kits are currently there?
Currently only the SPACE SET, most of you will remember this set, it additionally was present in our previous 2 carnage events. 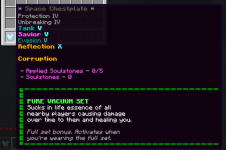 We are planning to add more sets throughout the season so stay tuned!

Claimbox
The claimbox is a new way next to the dropzone to claim items, it is currently mainly used so items don't get lost if your dropzone or inventory is full!
You can access it with two commands, either /claimbox or /itemclaim.

We are planning to integrate this feature more into our gameplay so only really important things get sent to your dropzone. 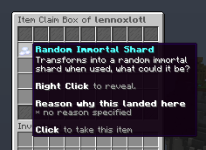 Voting
We made some changes to our vote system, encouraging people to vote regularly.

The base system of voting has not been changed, you will still receive the lootbox but there is something new.
There now are vote points, these points can be used in the new vote shop (/voteshop).

The voting points WILL NOT reset when a new season starts (they will carry over).
We are planning to change the items in this vote shop frequently.

Funding
We have made quite a few changes to how funding works as a result to your feedback from last season.
This hopefully makes this feature more attractive to you players, if you still find it too annoying instead of helpful make sure to let us know!
Just keep in mind this is a balancing feature so removing it is not an option.

Changes to set bonuses
We have made quite a few changes to our set bonuses with the goal of balancing them a bit more.
We will balance other sets if we notice them being too weak or too op throughout the season.

Loot Tables
All loot tables have been re-balanced.
This change was really urgent as we have heard your feedback last season and are really sorry once again for the unbalanced loot tables.

Thanks to ChaosZeroPvP and the entire team for making this possible! Thanks to ChaosZeroPvP for helping with this spawn.

Other notable changes
Multiple other changes were made which are worth to be mentioned here.

What is planned for this season?
Well, quite a lot, we are trying to deliver updates frequently, below you can find a list of some of the bigger things which most likely will be added.

Thats all for this update, enjoy!
Thanks for being patient with us.
The Shinybounds Management​